In the summer of 2014, my colleague Dr. Pablo Garcia-Tello, Dr. Markus Nordberg (who was Resources Coordinator of the ATLAS project at CERN at the time), Dr. Marzio Nessi (who was then still overall technical coordinator and ATLAS project manager) and I started discussions on a new way of fostering breakthrough innovation that would do away with the typical serendipity conundrum. In many organisations, innovation is not a sustained and planned process; instead it is highly dependent on available time, money, capacity, management priority and many other factors. Public grants can act as innovation-facilitators, but in most cases the innovation stops as soon as the grant money is used up. It is then back to square one: applying for new grant funding, and convincing management that capacity and money will prove to have been well-spent…one day. This innovation serendipity conundrum leads to unnecessary waste of money, time and capacity. Moreover: it does not help society at large in meeting many of its challenges.

The result was a proposal submitted by a group of European Research Infrastructures, a business university, a design-thinking university and an industry association, to the European Commission. That proposal, under the name ATTRACT, was highly successful in validating our three-step approach, and has since led to a sequel project in which game-changing innovations are guided in a sustained way from their basic science foundation to concrete societal applications. You can visit the ATTRACT website by clicking here.

Interview originally printed in the Dutch science newsletter “Onderzoek Nederland” (September 2015 issue, nr. 372) and based on an earlier article I wrote myself. In the interview I explain the real risk that getting H2020 funding under the Industrial Leadership and the Societal Challenges Pillars is starting to turn into a lottery. Many researchers – particularly those at the mid-stage of their career where the need to publish is highest – opt to participate in as many proposals as possible hoping that at least one will succeed. The solution to the problem for these pillars is to focus the evaluation not on scientific excellence, but on the participation of industry (e.g. Impact). After all: these specific pillars are meant to solve real-world problems and create real-world jobs for Europe. Only if proposals score equally on Impact the evaluators should consider scientific innovation to make a decision on who gets funded. 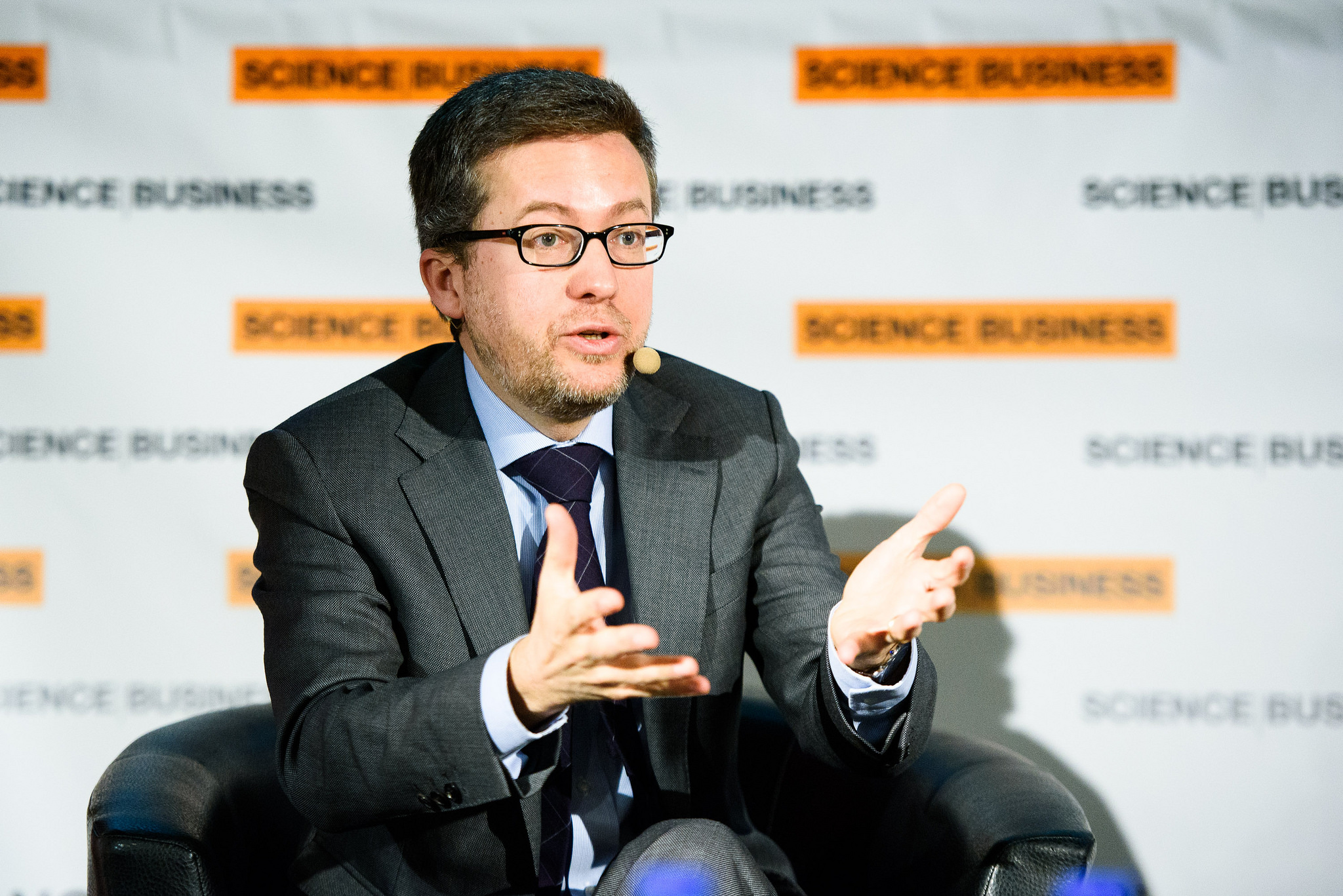 Last week, Brussels-based ScienceBusiness held its 4th edition of the Horizon2020 conference in Brussels. Central theme of the day was the concept of “Open Innovation” as the way forward in European research.
Commissioner Moedas shared the latest thoughts of the European Commission on the European Innovation Council (EIC).  Other speakers (non exhaustive list!) were former CERN-DG Rolf-Dieter Heuer, who is now Chair of the  EU Scientific Advice Mechanism and Jean-Pierre Bourguignon who is the President of the European Research Council. Nathan Paul Myhrvold,  formerly Chief Technology Officer at Microsoft and co-founder of Intellectual Ventures, compared US and EU approaches to innovation and gave examples of how a more entrepreneurial attitude among the new generation of scientists is already radically reforming our economies and societies. Over 230 people from academia and industry participated in the conference. Several thousand people watched the live-stream!

In a separate workshop I moderated the ScienceBusiness Network meeting, where we shared best practices on H2020 research proposal development and implementation. The Network Members discussed ‘do’s & don’ts’ and identified possible improvements for the next Research Framework Programme (FP9). On behalf of the  network I subsequently  participated in the panel discussion with Robert-Jan Smits, the director-general of DG-Research at the Commission (see picture above). Smits outlined several changes to the further execution of the H2020 funding call programme as well as some further simplifications in the implementation of project, fow example on the use of timesheets. Smits admitted that despite the overall success of the programme and the endorsement of the application process by the European research community,  there are still some significant improvements possible, in particular in relation to the evaluation process. Most Calls will in future follow a 2-stage process, whereby the aim of the Commission is that in the second-stage the success rate will be around 1:3. Following a question from the audience, Smits confirmed that he would re-assess the Commission’s earlier decision to scrap the so-called “Consensus Meeting”. The audience felt that the Consensus Meeting plays an important part in ensuring that the assessment of all evaluation panellists is taken into account before the final ranking. Smits also promised to check whether in future the Evaluation Summary Report can be a little more specific and detailed tan is currently the case.

The video-cast can still be accessed by clicking on this link: http://www.sciencebusiness.net/events/2016/the-2016-science-business-horizon-2020-conference-4th-edition/ 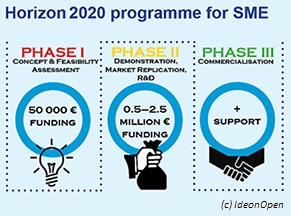 For an SME, the statistics on getting European public funding are not that great. One of the ways for the European Commission to increase interest and participation of SMEs has been the creation of a special ‘SME Instrument’ within the overall H2020 framework programme. Only SMEs need apply! The question I am raising here is: does Europe’s economy get maximum benefit from this programme, or is the Commission missing a vital element?!

Apart from the many hours that go into writing a credible funding proposal and completing the forms in a programme like the H2020 SME-Instrument, the competition itself during the evaluation of proposals is fierce. The SME Instrument is divided into 3 sections: in ‘Phase-1’ the (starting) SME requests funding for the development of a business plan toward the actual technical development of a product or service. ‘Phase 2’ proposals relate to the actual research and technical development of a product/service up to the level where it is almost ready for market introduction. ‘Phase 3’ (commercial introduction through special loans) is not really in full operation yet.

Before I come to my point, here are some numbers: in its first year of operation (June 2014-March 2015), a total of 8542 funding proposals were submitted under ‘Phase 1’. Roughly 8.6% made it to funding. To be more precise: of the 8542 proposals, only 874 came ‘above threshold’, meaning that they met the minimum quality-level to be considered for funding. Of those, 2/3 were then ranked high enough for the EC to offer them the money (stats were presented by the European Commission during the March 24 ScienceBusiness conference on the success of the H2020 programme).

For ‘Phase 2’, the number of proposals submitted was relatively low. Most likely reason is that the scheme is still new and not many companies sufficiently understood the structure in which projects needed to be framed. A total of 1823 proposals were submitted of which 312 were ‘above threshold’. 134 of those were offered the grant, so about 43%.

So what’s the issue? Consider this: out of the 874 projects ‘Phase 1’ proposals that were considered to have an excellent business idea for which there is a real market and the pathway from idea to product is well defined, 282 still did not get the EC grant in the end. And what happens to these highly innovative – failed – ideas as far as the Commission is concerned? … Nothing! If the proposers are not discouraged by the rather complicated application process, they can of course resubmit their proposal. But there is a time-lock on doing that: you cannot resubmit your idea in the very next round. For a (starting) SME, this is terrible! Markets move fast and ideas are developed and/or snatched up elsewhere within the blink of an eye. From the perspective of Europe’s economy, it’s even worse: each of these proposals was judged by experts to be innovative with the potential to give Europe a competitive edge. Each of these proposal comes with a real prospect of creating new jobs; jobs that Europe really needs right now.

One might say that ‘as far as Europe is concerned’, the Commission is doing an even worse job with regard to ‘Phase 2’ proposals: despite the higher funding success for projects above threshold, out of the 312 proposals that would bring business concepts to the stage at which companies can start thinking about mass production and hiring extra staff, 178 were dismissed. To the Commission I would say: “Are you serious??!”

My point and suggestion to the Commission is that it should urgently find a way to better capitalise on the fact that through its rigorous technical evaluation so many innovative projects have been discovered. Although I personally believe this statement holds true across all of H2020, it is particularly true for the SME Instrument because – to me – there a fairly simple solution at hand given the fact that most/all proposals are submitted by single applicants rather than cross-border consortia.

My view is that the Commission should send failed (but above threshold!) proposals directly to the political region (e.g. province, bundesland, department or similar) in which the SME is located. After all it is there that the company will grow and most likely create these new jobs. So it is in the direct interest of the region to know about these initiatives and support them.

Having been an elected regional politician myself for eight years, I believe I can say that this is exactly what these regions are looking for. In fact, they will most certainly be delighted that the Commission has already taken care of the really difficult bit, namely the  technical evaluation of the innovation and delivery capacity of the company in question. I would also argue that every political region has its own ‘pot of money’ ready to support regional economic innovation initiatives, either directly or through a regional Economic Development Company or Chamber of Commerce. And then there is also the European  Fund for Regional Development (EFRO) which is being repositioned anyway from funding public infrastructure toward funding innovation. One might also consider the Interreg programme as a potential funder of a regionally located project where – for example – it touches intra-European borders. What I am arguing here for is in fact a move that should fit in particular EC Commissioner Frans Timmermans in his drive to deregulate and ensure that EU policies are linked much more closely to what is needed nationally and regionally. My suggestion is neither rocket-science nor particularly difficult to implement (which is not the case for cross-border consonsortia-applications, where you would run the risk of duplicating a fairly cumbersome international Eureka/Eurostars bureaucracy).

So, dear Commission: please give high-class – but failed – proposals in the SME Instrument a second chance by sending evaluated proposals directly to the regions concerned. For them, this could be an important new approach toward their own regional development strategy. For you as Commission it would strengthen your position as broker and custodian of European innovation and job creation. A win-win for all!

This opinion article is a follow-up on an article I wrote in May 2015 in the Brussels’ ScienceBusiness magazine. That article can be found by following this hyperlink.