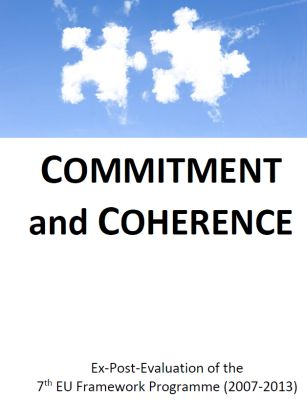 (Please note that the article below is a personal opinion and does not reflect the view or position of any organisation I am working with/for).

Three weeks ago a High Level Expert Group published the ex-post evaluation of the 7th Framework Programme for Research, the predecessor of Horizon2020. The pan-European programme ran for 7 years, spending just about €55 billion euro across a multitude of interlinked research programmes. According to the report, 139.000 proposals were submitted, of which 25.000 actually received funding.

Whilst this report confirms what a great number of other reports have already said about the programme’s ability to advance science and create international collaborations, its assessment on the economic impact of the programme is – to say the least – remarkable.

Let’s start with a simple point. In report-chapter 6 called “Estimation of macro-economic effects, growth and jobs”, the Expert Group relies on two prior reports (Fougeyrollas et al. in 2012 and Zagamé et al. in 2012) to estimate that “…the leverage effect of the programme [stands; RP] at 0,74, indicating that for each euro the EC contributed to FP7 funded research, the other organizations involved (such as universities, industries, SME, research organisations) contributed in average 0,74 euro”.
What a statement to make: after all, everybody knows that in order to get access to FP7 funding, each organisation needed to provide a substantial cash or in-kind contribution. The Expert Group then continued by arguing that “…the own contributions of organizations to the funded projects can be estimated at 37 billion euro. In addition, the total staff costs for developing and submitting more than 139.000 proposals at an estimate of 3 billion euro were taken into account. In total, the contribution of grantees can be estimated at 40 billion euro”. Again, considering that organisations were required to chip in at least 30% of their own money to access the 70% of FP7 funding, one can only conclude that this amount was – in effect – a donation by these organisations and should not be confused with Actual Impact of the FP7 programme, as the Expert Group would have you believe.

But there is more: Using this flawed argument, the Expert Group subsequently draws the conclusion that: “The total investment into RTD caused by FP7 can therefore be estimated at approximately 90 billion euro”. Huh?! So if I take the €50 billion of FP7 given by the Commission and I add to that the contribution of applicant successful organizations (as the EC doesn’t fund 100%), I end up declaring that FP7 has contributed €90 million to the EU economy?! I don’t think so. Clearly, when doing their calculations, the Experts considered researcher salaries as the main metrics. This is confirmed in the report, as it says: “When translating these economic impacts into job effects, it was necessary to estimate the average annual staff costs of researchers (for the direct effects) and of employees in the industries effected by RTD (for the indirect effects). Based on estimated annual staff costs for researchers of 70.000 euro, FP7 directly created 130.000 jobs in RTD over a period of ten years (i.e. 1,3 million persons‐years).” If that’s the case, then why did we bother with FP7 at all… you could have achieved the same economic result by introducing a simple European tax reduction programme for employed researchers.

In fact, rather than the Expert’s grand conclusion that: “Considering both ‐ the leverage effect and the multiplier effect ‐ each euro contributed by the EC to FP7 caused approximately 11 euro of direct and indirect economic effects”, I would take the numbers to mean that thanks to the leverage effect and the multiplier effect, the European Commission managed to convince organizations during FP7 to give away 11 Euros for each Euro which it put into FP7. Furthermore, contrary to the Expert Group’s conclusion, I would at least argue, that their multiplier should then also have taken into account all the hours spent by applicant consortia writing proposals that did not get funding although they were above the funding threshold. As I showed in a previous article, the value of those hours amounts to roughly 1/5 of the total H2020 budget. In simple economic terms: their hours in service of the European economy could have been spent better.

FP7 wás a success: like no other research programme, it encouraged researchers from academia and industry alike to consider and test new ideas and start working together. The problem with FP7 was that ‘knowledge deepening’ did not (semi-)automatically mean that research results were then taken up by industry and translated into technologies and innovations. And that’s what FP7 to a large extent aimed to do. So in that sense, the only conclusion I can draw is that FP7 was a good effort. It’s most important achievement for me was that it paved the way for a new kind of thinking inside the Commission which put concrete and measurable impacts for science and society, for jobs and competitiveness at the centre. H2020 is the result of understanding that FP7 had some design faults which needed correcting. All the more interesting to read that Robert-Jan Smits’ (DG for Research at the Commission) solution for stemming the current tsunami of proposals now being submitted to H2020 is to put even more emphasis in the evaluation process on expected – measurable – Impact results. Go Commission!